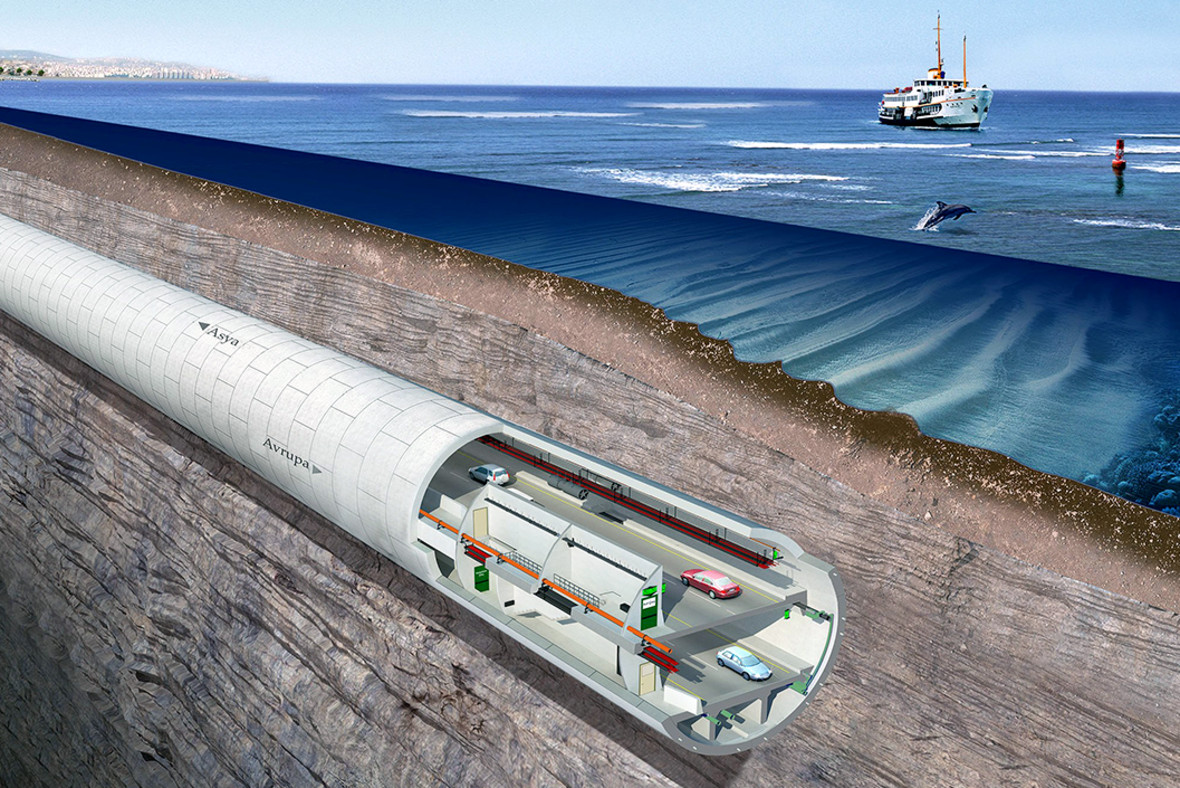 The Marmaray’s sister, the Eurasia Tunnel, a mega project that allows automobiles transit access between the Asian and European sides of Istanbul under the Bosporus strait and will ease Istanbul’s notorious heavy traffic, opens today

The Eurasia Tunnel, connecting the Asian and European continents underneath the Marmara seabed, will be inaugurated today withPresident Recep Tayyip Erdoğan, Prime Minister Binali Yıldırım and many other foreign guests in attendance.

The tunnel, expected to provide a practical solution to Istanbul’s traffic problem, will cut down the travel time between the two sides of Istanbul to just 15 minutes.

The inauguration ceremony will begin at 2 p.m. today and will be attended by President Erdoğan, Prime Minister Yıldırım and a large number of foreign guests, including ministers and ambassadors.

The bidding for the two-story tunnel project for rubber-wheeled vehicles, followed the footsteps of the undersea rail tunnel Marmaray and was held by the General Directorate of Infrastructure Investments of the Transport, Maritime Affairs and Communications Ministry on June 12 , 2007.

The Eurasia Tunnel, which will significantly reduce the travel time between Istanbul’s Kazlıçeşme on the European side and Göztepe on the Asian side, was planned in connection with the three existing bridges crossing the Bosporus strait.

Asphalting work in the project continued at full speed at the small Samatya district ahead of the opening today. A great deal of work has also been completed in Çatladıkapı where the tunnel entrances are located and toll booths have also been placed.

The two-story tunnel, which is 14.5 kilometer long, including a 5.4-kilometer section under the Bosporus, has been constructed for rubber-wheeled vehicles only.

It will also reduce the travel time from 100 minutes to 15 minutes on a route with heavy traffic. While the traffic flow will become smoother thanks to the expansion and regulation of connection roads at the entrance and exit points of the tunnel, the tunnel will also help reduce environmental pollution and noise.

As the project will be the shortest route between Kazlıçeşme and Göztepe, it will reduce fuel costs, as well as the amount of harmful gas released into the air and the maintenance costs of vehicles.

The construction on the tunnel began in 2011 and has cost an estimated $1.25 billion. Built 106 meters under the Bosporus, the tunnel is expected to be used by 100,000 vehicles per day.

The Eurasia tunnel will also provide uninterrupted 4.5G mobile data service at 106 meters below the sea level. The coverage will be provided with 16 radio station transmitters.

Instead of the Free Toll Collection System used on the Fatih Sultan Mehmet Bridge, the Eurasia Tunnel features counters between each lane, similar to that of the July 15 Martyrs Bridge.

Drivers can use all lanes regardless of the system they are using. The tolls will be $4 plus VAT for automobiles and $6 plus VAT for minibuses in one direction in the first year.

The General Directorate of Infrastructure Investments of the Ministry of Transport, Maritime Affairs and Communication selected Eurasia Tunnel Operation Construction and Investment Inc. (ATAŞ) to design, construct and operate the project for 24 years and five months. After 24 years, the tunnel will be transferred to the public.

The advantages of Eurasia Tunnel

Fast
Eurasia Tunnel is among the most important investments with regards to bringing a solution to the traffic problem of Istanbul, which aims to host giant international events in the coming period.

TomTom, one of the leading navigation companies in the world, has declared Istanbul as the second city with the heaviest traffic in the world. While Moscow ranked the first in TomTom’s 2012 traffic jam index with 66 percent, Istanbul took second place with 55 percent. Last year in Istanbul, December 20, the opening day of the Eurasia Tunnel, was recorded as the worst day of traffic.

The data reveals that Istanbulities on average waste a total of 118 hours annually just for a 30-minute travel every day. It can take a one-hour distance an average of two hours and four minutes due to traffic congestion.

Therefore, the Eurasia Tunnel will significantly reduce the travel time between Kazlıçeşme and Göztepe, bringing it down from 100 minutes to 15 minutes. Thus the Eurasia Tunnel will provide a fast and safe travel to the Istanbulities. With the expansion and regulation of the access roads located at the tunnel’s entrance and exit, the traffic will run faster.

Economical
The usage of existing passages between Kazlıçeşme in the European side and Göztepe in the Anatolian side causes a long-distance and vehicle-intensive trip, and this has a negative effect on fuel consumptions and vehicle maintenance costs.

Since Eurasia Tunnel Project will be the shortest route between Kazlıçeşme – Göztepe, the fuel cost will decrease. The fast traffic in the Eurasia Tunnel will contribute to the fuel economy, and also decrease the maintenance costs of the vehicles. The drivers will be charged for the vehicle and they will not pay any additional fees for the passengers.

Safe
One of the world’s leading engineering projects, the Eurasia Tunnel will have an improved system for its 24/7 safe, healthy and uninterrupted traffic flow.

Constructed with the most advanced design, technology and engineering applications, the tunnel is designed to withstand earthquakes of magnitude up to 7.5 on Richter scale and tsunami. Furthermore, with its advanced security features, it can be used as a shelter when necessary.

The tunnel will include a closed-circuit camera system, which monitors every corner 24/7, event detection systems, and communication and notification systems. Speed control within the tunnel will be provided by some high technology infrastructure.

Comfortable
The Eurasia Tunnel Project is designed to improve driving comfort. Modern lighting, high-capacity ventilation and low-slope features will increase the comfort of the travel. The two-story tunnel will also affect driving comfort positively thanks to the contribution it provides to road safety. It will provide uninterrupted travel even in bad weather conditions such as fog and icing.

Environment-friendly Eurasia Tunnel will reduce fuel consumption and the amount of harmful gas released into the air by shortening travel distances and providing traffic flow.

With an exemplary Environmental and Social Impact Assessment (ESIA) report with international standards, the Eurasia Tunnel will be a highly sensitive project regarding the environmental and social impacts.

Similar projects around the world

Tunnel projects in different parts of the world are preferred as the most practical, safe and environmentally sensitive solution to the transportation problems in cities.

Numerous tunnel projects have been built and operated so far all around the world and all the proven methods and technologies of operation, security, traffic management, control and ventilation were used in the design, planning, construction and operation of the Eurasia Tunnel.

Manhattan Island is the heart of the New York City of the USA. The most important arteries feeding this heart are the bridges and tunnels that connect the area around the island. A total of four tunnels connected to Manhattan have been balancing the distribution of traffic in a dense area for over 50 years.

The length of the SMART (Storm-water Management and Road Tunnel) tunnel, which crosses Malaysia’s capital city Kuala Lumpur under the surface, is 9.7 kilometers long. The tunnel constructed with TBM (Tunnel Boring Machine) technology has a dual function.

On one hand, the two-story tunnel backs Kuala Lumpur’s transportation infrastructure, and vehicles, on the other hand, it is evacuated in heavy rainy periods and the tunnel serves as a water conveyance line, which is used to transfer the flood waters of the Klang river frequently flowing towards the center of the capital, into a suitable basin. The tunnel’s construction began in 2003 and it was put into service in 2007.

The A86 highway tunnel in France has been developed as a private sector project to complete the missing section of the circular highway that surrounds Paris under the surface. There is a double-deck road for light vehicles in the four-kilometer-long eastern part of the project, whose single-story section runs 6.5 km in the west. TBM technology was used in the construction of the tunnels.

The Turkish Interior Minister issued a warning to foreign nationals holding a residence permit (ikamet) and violating the curfew under the guise of tourists. “I tell you clearly: whoever tries to abuse their ikamet and...
Read more
News

Direct flights between Ukraine and Alania 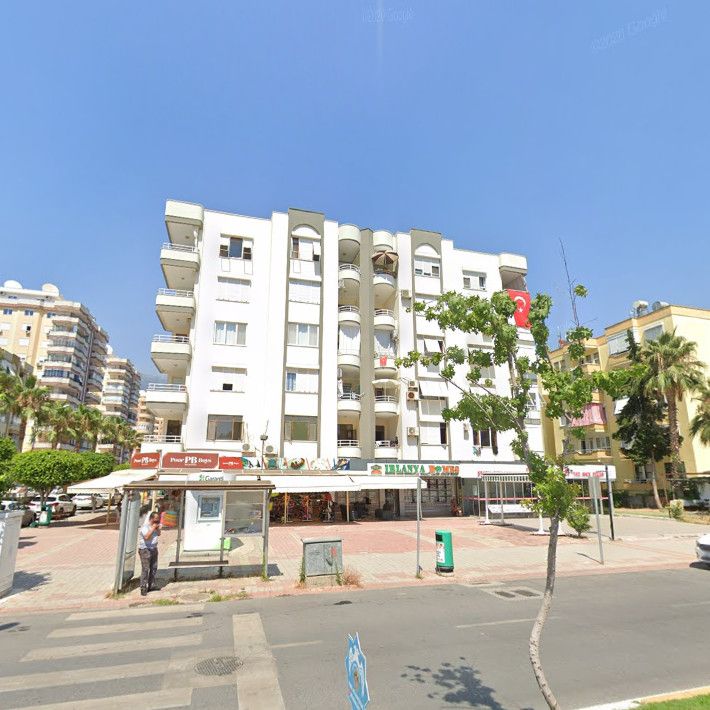 Excellence is not a choice but a must of our business and our main goal is to reach this objective...